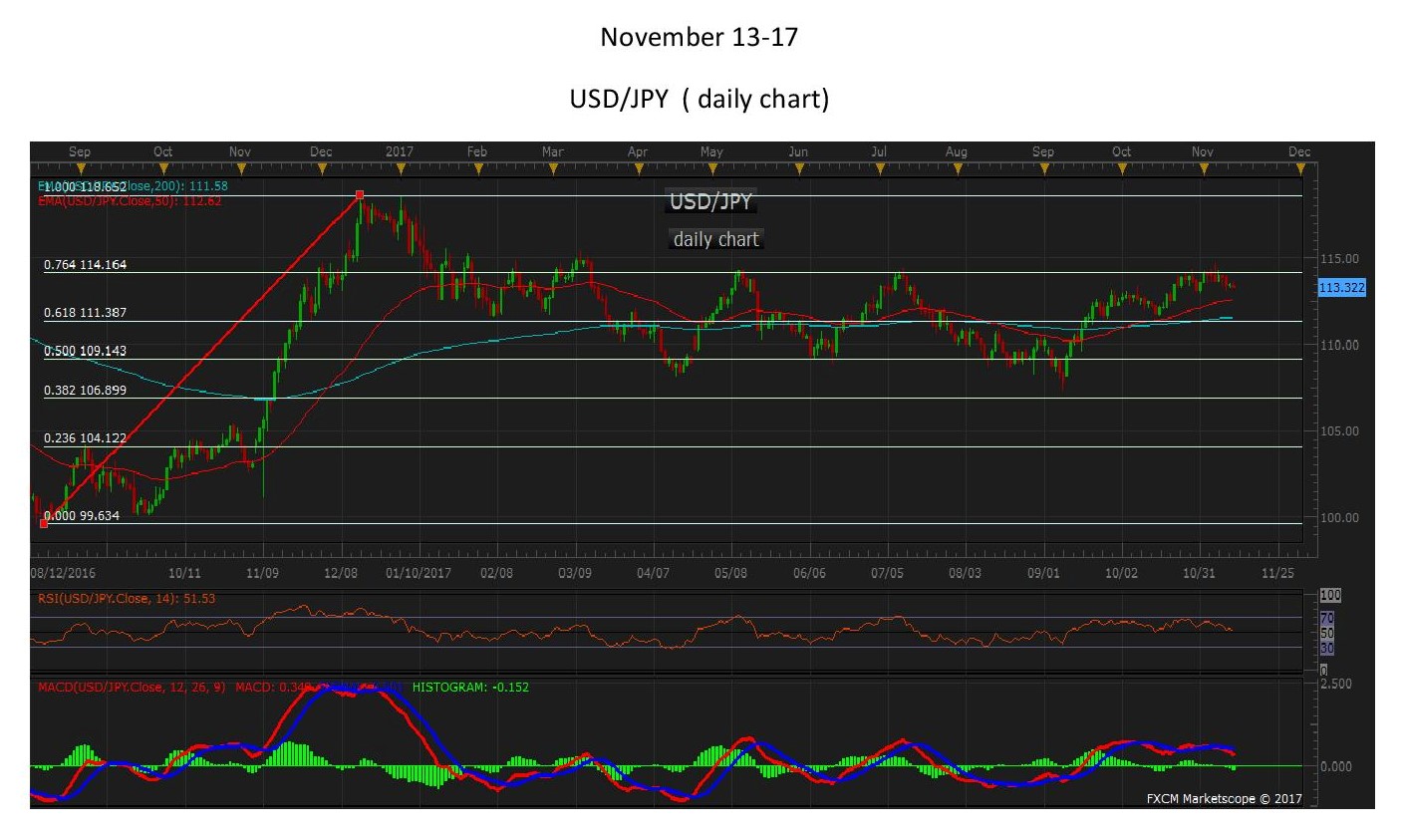 Gross Domestic Product of Japan is expected to grow 0.6% in the last quarter of 2017 compared to the previous quarter. Most of the economists believe that the Nikkei 225 index will continue to rise based on Japan’s great data.
Another important data, this time for the USD/JPY pair, will be US retail sales on Wednesday. According to the forecast, US retail sales might stagnate (0.0%).
U.S. retail sales were up 1.6% in September following an upwardly revised decline of 0.1% in August, which was negatively affected by hurricanes Harvey and Irma. 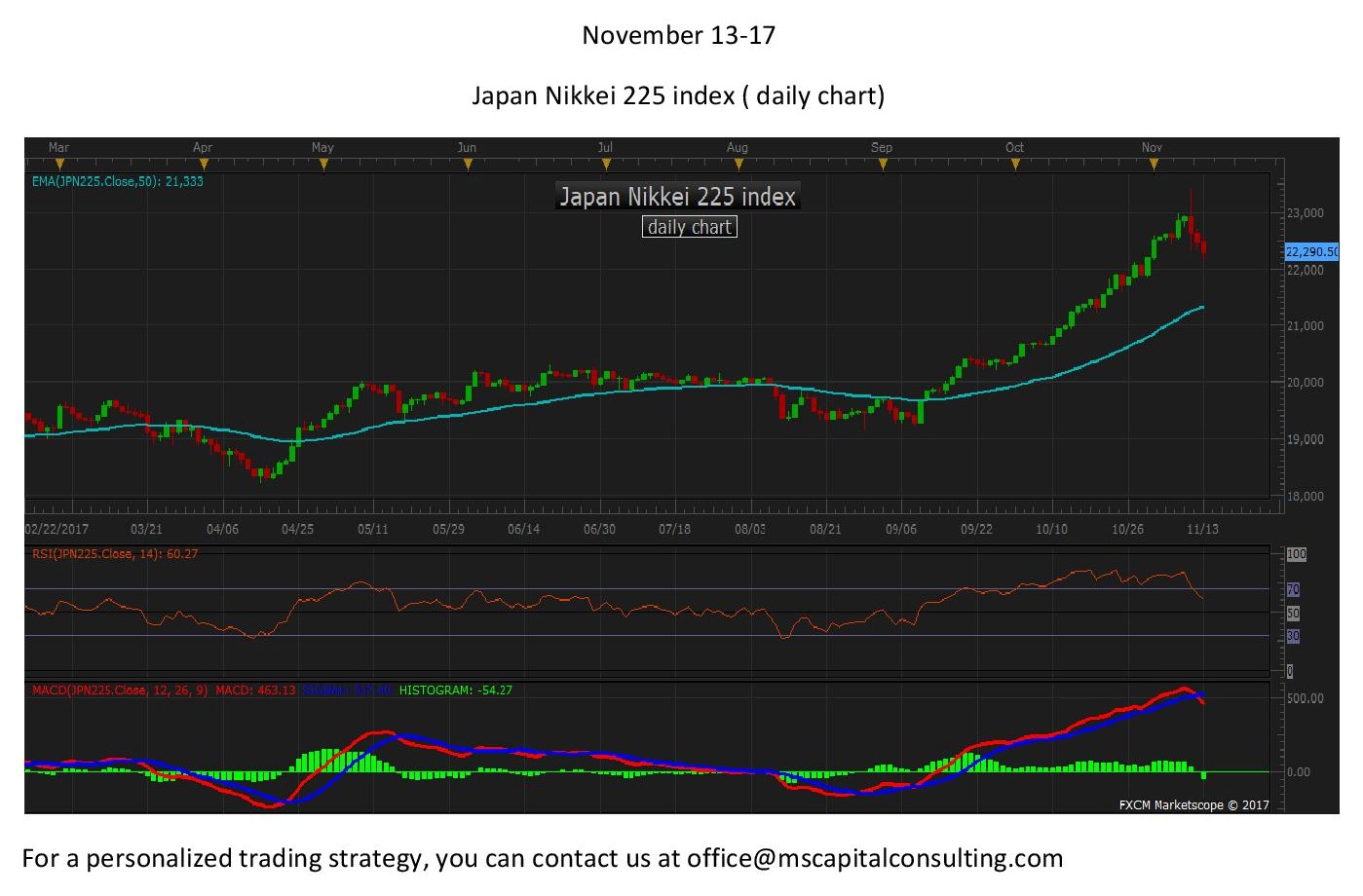 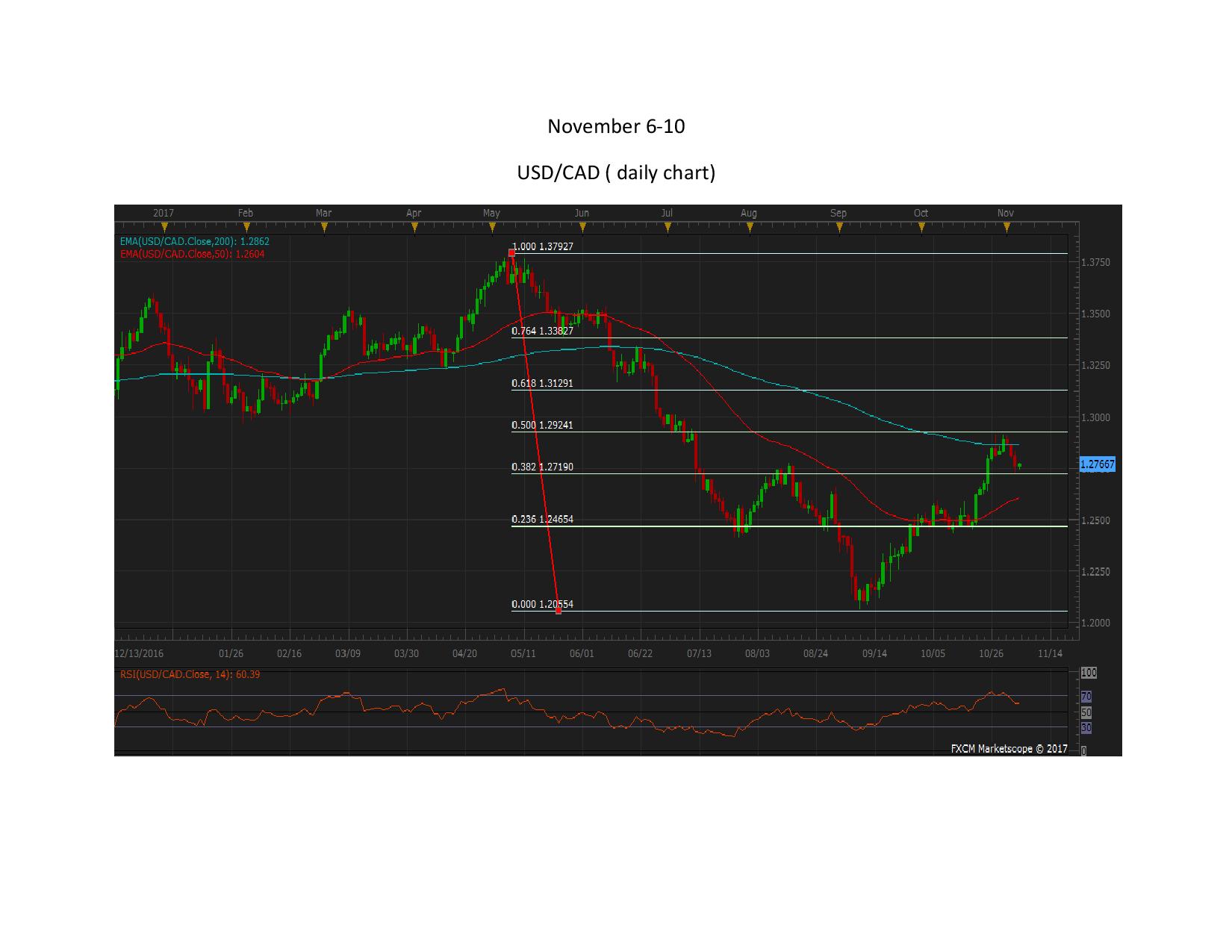 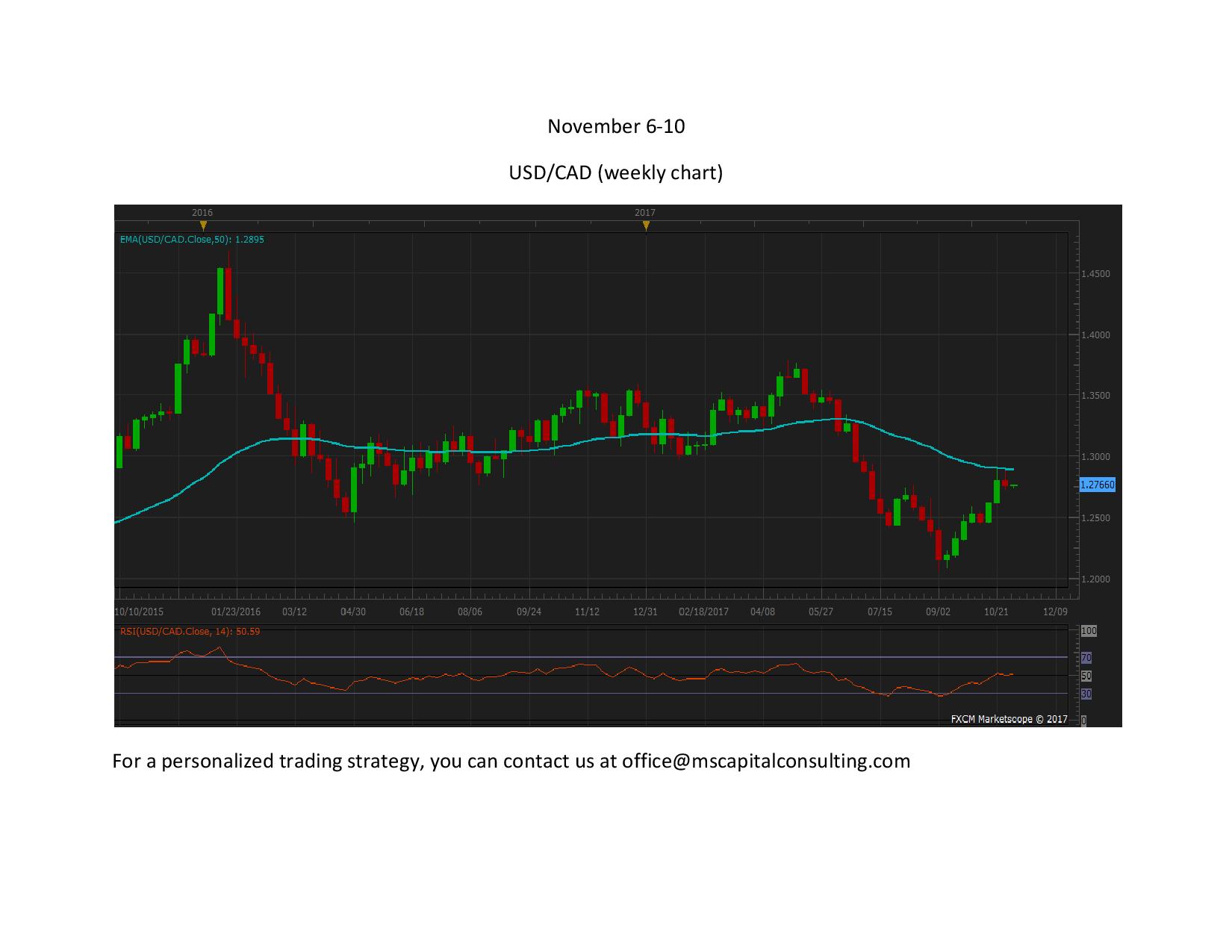 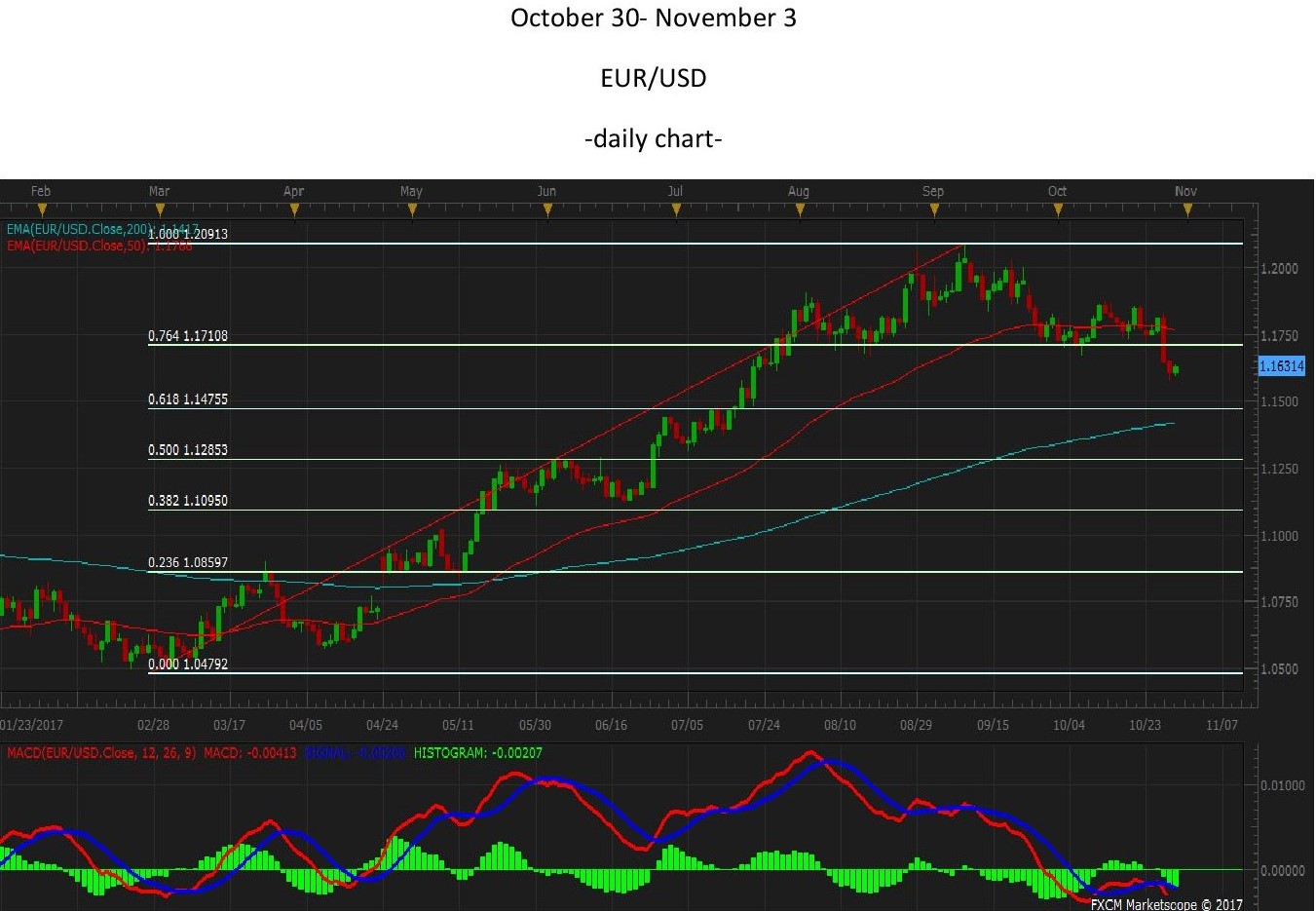 However, a stream of positive data on the U.S. economy might continue to flow in, at the end of this week. The EUR/USD pair might assume a bearish bias after the release of the U.S. data.According to the analysts estimates, U.S. ADP might add 200k and NFP might add 310k new jobs. The unemployment rate is expected to remain unchanged at 4.2%. 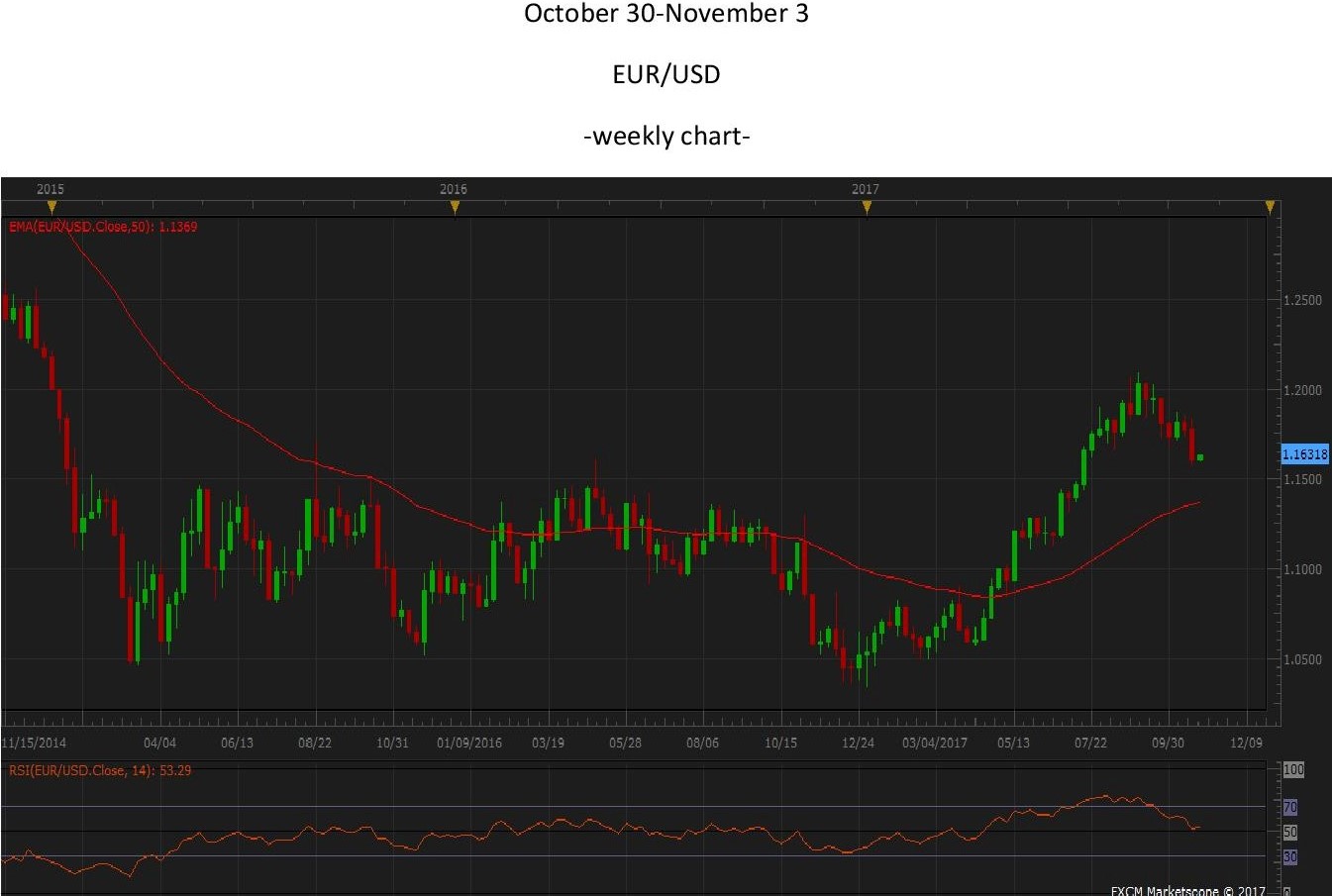 The New Zealand Dollar slumped last week after New Zealand First Party agreed to form a new government with Labour Party leader Jacinda Ardern (37 years), ending the National Party’s decade in power.
The result deals a blow to incumbent Prime Minister Bill English, who has served three terms and whose party secured a greater share of the vote than Labour and Greens put together.
The announcement of the new government drove the New Zealand dollar down around 1.7 percent to its lowest levels in four and half months, as markets worried about more protectionist policies.
“The chances of a sharper slowdown are higher under Labour”
Labour had an even chance as National to form a government after inconclusive elections on Sept. 23 gave neither party enough seats to form a majority in parliament.“Their tighter immigration proposals and more restrictive housing policy all suggest economic growth could be a little bit weaker than the Nationals’ policy,” according to Paul Dales, chief Australia and New Zealand economist at Capital Economics. “The chances of a sharper slowdown are higher under Labour”. Record net migration of more than 70,000 annually has fuelled demand for housing in New Zealand, far outstripping supply and pushing house prices prohibitively higher, pricing ordinary New Zealanders out of the housing market.
A more restrictive trade could hurt New Zealand’s reputation
Market’s had feared a Labour, New Zealand First and Green Party coalition the most because this grouping is likely to pursue more aggressive reforms of the Reserve Bank of New Zealand and a sharp reduction in the number of migrants who are granted work visas.
More restrictive trade and foreign ownership could also hurt New Zealand’s reputation as an open economy and antagonize the likes of China, a key trading partner. Labour said it would stick to its campaign promise to change the central bank's mandate, seek to renegotiate the Trans-Pacific Partnership trade deal and prioritize an effort to ban foreign ownership of certain types of housing.
Trade between the two countries has grown to more than NZ$20 billion ($14.4 billion) a year and Chinese President Xi Jinping called the relationship “unprecedented” in its depth. 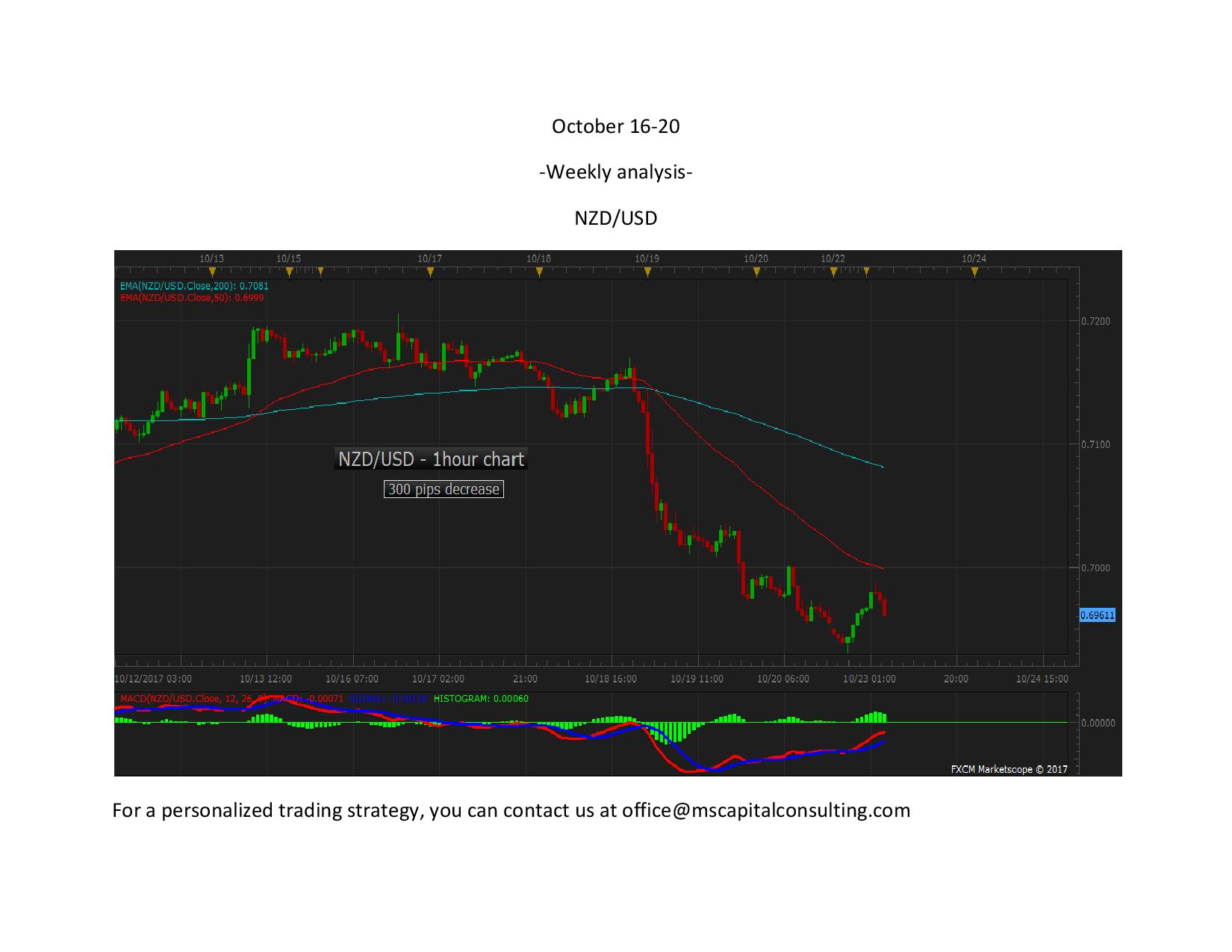 Britain’s economy grew at its slowest pace since 2013 in the 12 months after Brexit vote. The Bank of England might prepare to raise interest rates for the first time in a decade.

The world’s fifth-biggest economy was just 1.5 percent bigger than a year earlier in the second quarter. The weakest expansion in more than four years and down from a rate of 1.8 percent in the first three months of the year.

Britain’s Office for National Statistics had previously estimated second-quarter growth at 1.7 percent. None of the economists had expected such a big downward revision.

Sterling fell after the UK data

The recent data also showed a monthly fall in output for the services sector in July, boding poorly for third-quarter growth. Sterling fell after the data and prompted some economists to reconsider their prediction of a rate hike at the end of the BoE’s next meeting on Nov. 2.

BoE Governor Mark Carney said last week the economy was on track for a rate hike “in the relatively near term”, two weeks after the BoE jolted markets by flagging a rate rise “in the coming months,” despite weak growth this year. The BoE has downgraded its estimate of how fast Britain’s economy can grow without generating excess inflation because of the impact of Brexit.

In the same time, the U.S. economy grew a bit faster than previously estimated in the second quarter, recording its quickest pace in more than two years, Gross domestic product increased at a 3.1 percent annual rate in the April-June period, the Commerce Department said in its third estimate on Thursday. The upward revision from the 3.0 percent rate of growth reported last month reflected a slightly faster pace of inventory investment.

Growth last quarter was the quickest since the first quarter of 2015 and followed a 1.2 percent pace in the January-March period. Economists had expected that the second-quarter GDP growth rate would be unrevised at 3.0 percent.

The U.S. still have a strong labor market despite hurricanes

Estimates for the growth rate in the July-September period are just above 2.2 percent.Harvey and Irma continue to impact the labor market and are expected to cut into job growth this month. In a third report, the Labor Department said initial claims for state unemployment benefits increased 12,000 to a seasonally adjusted 272,000 for the week ended Sept. 23. Claims have now been below the 300,000 threshold, which is associated with a robust labor market, for 134 straight weeks. That is the longest such stretch since 1970, when the labor market was smaller.

Prices for U.S. Treasuries held losses after the data and the dollar fell to a session low against a basket of currencies. U.S. stock index futures were trading lower. The Federal Reserve needs to continue gradual rate hikes despite broad uncertainty about the path of inflation, Fed Chair Janet Yellen added that acknowledged the central bank’s struggles to forecast one of its key policy objectives. 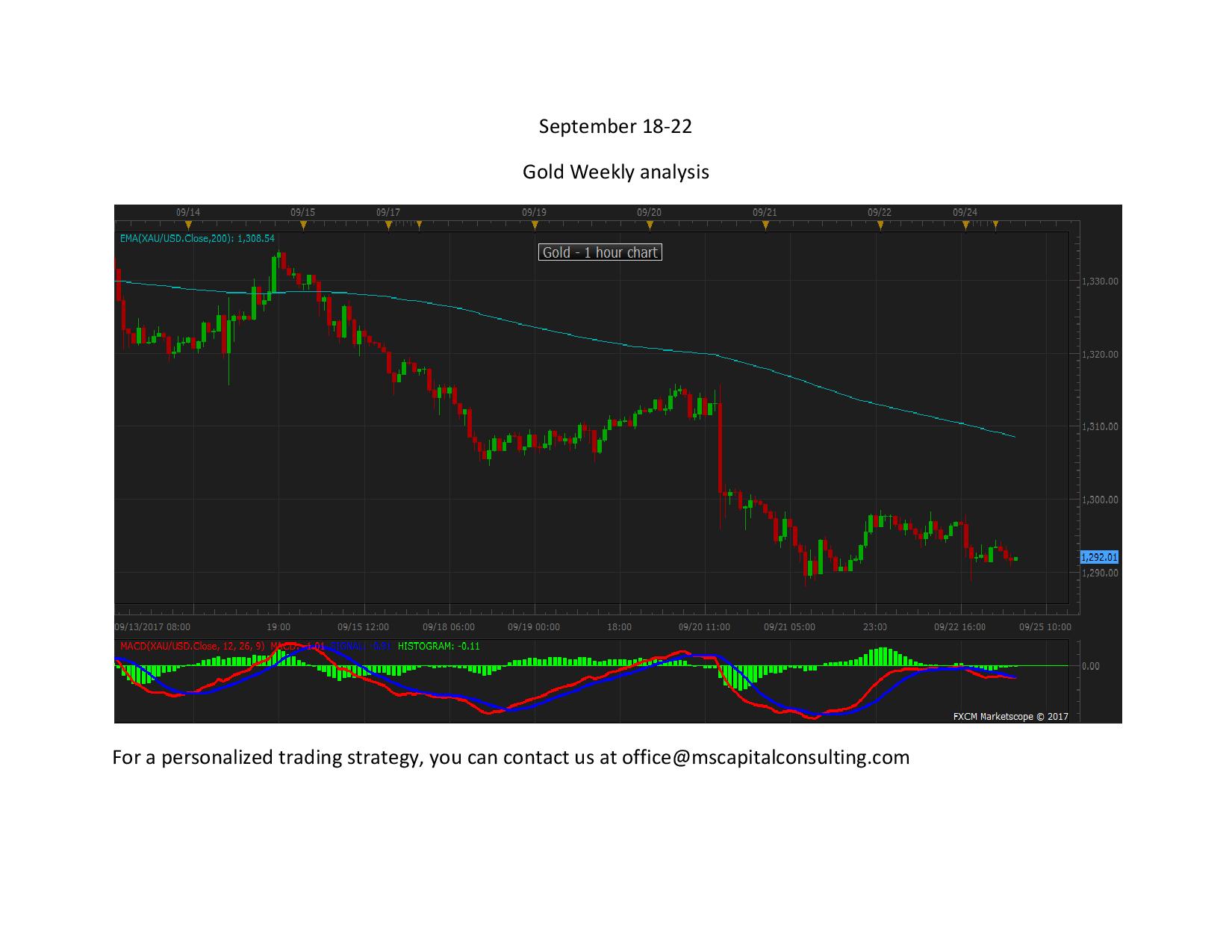 The Federal Reserve announced it would begin selling off its $4.5 trillion debt that it accumulated since 2008 by buying up investors’ toxic mortgage and T-bonds at above market rates.
Chair Janet Yellen set October as the start of the unwinding of the central bank’s balance sheet and stuck to the predicted one rate hike left for 2017. U.S. equity markets continued to churn in one of the tightest ranges in history. The investors are reluctant to add to bets that have pushed benchmark indexes to records.
Gold fell about 1 percent to its lowest in nearly four weeks on Thursday. Before the Federal Reserve announcement, the dollar had its worst slump, battered by political drama in Washington and shifting bets on central-bank policy. Managers of $3 trillion say the carnage has gone on long enough. 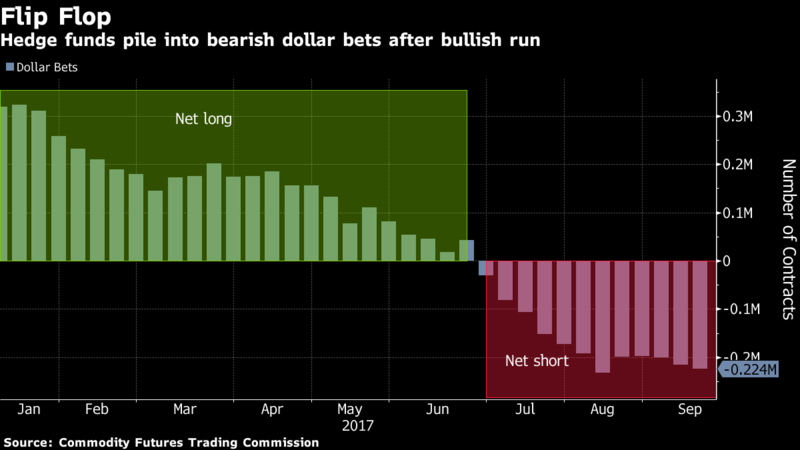 The Bank of England may raise interest rates in early 2018, the National Institute of Economic and Social Research (NIESR) estimated last week.“If indeed economic growth is sustained at the 0.4-0.5 percent level, we prescribe a 25 basis-point increase in Bank Rate in the first quarter of 2018 to reverse some of the emergency stimulus that the Bank of England injected into the economy last August in response to the EU referendum result” said Amit Kara, head of UK macroeconomic forecasting at NIESR.

The British public’s expectations for inflation remained stable in the three months to early August, a Bank of England survey showed last week, despite this year’s rise in price growth after the Brexit vote.

British consumer price inflation held steady at 2.6 percent in July after reaching 2.9 percent, its highest level in nearly four years, in May. Britain’s Brexit-bound economy is showing little sign that its leaden performance in the first half of 2017 is improving much.

The Office for National Statistics said manufacturing output rose 0.5 percent in July, above economists’ forecasts in a Reuters poll, after car production reversed a dip in the previous month.But growth in the broader measure of industrial output slowed to 0.2 percent. This is in line with forecasts as a lack of summer maintenance of North Sea oil fields boosted production more than usual for the time of year. 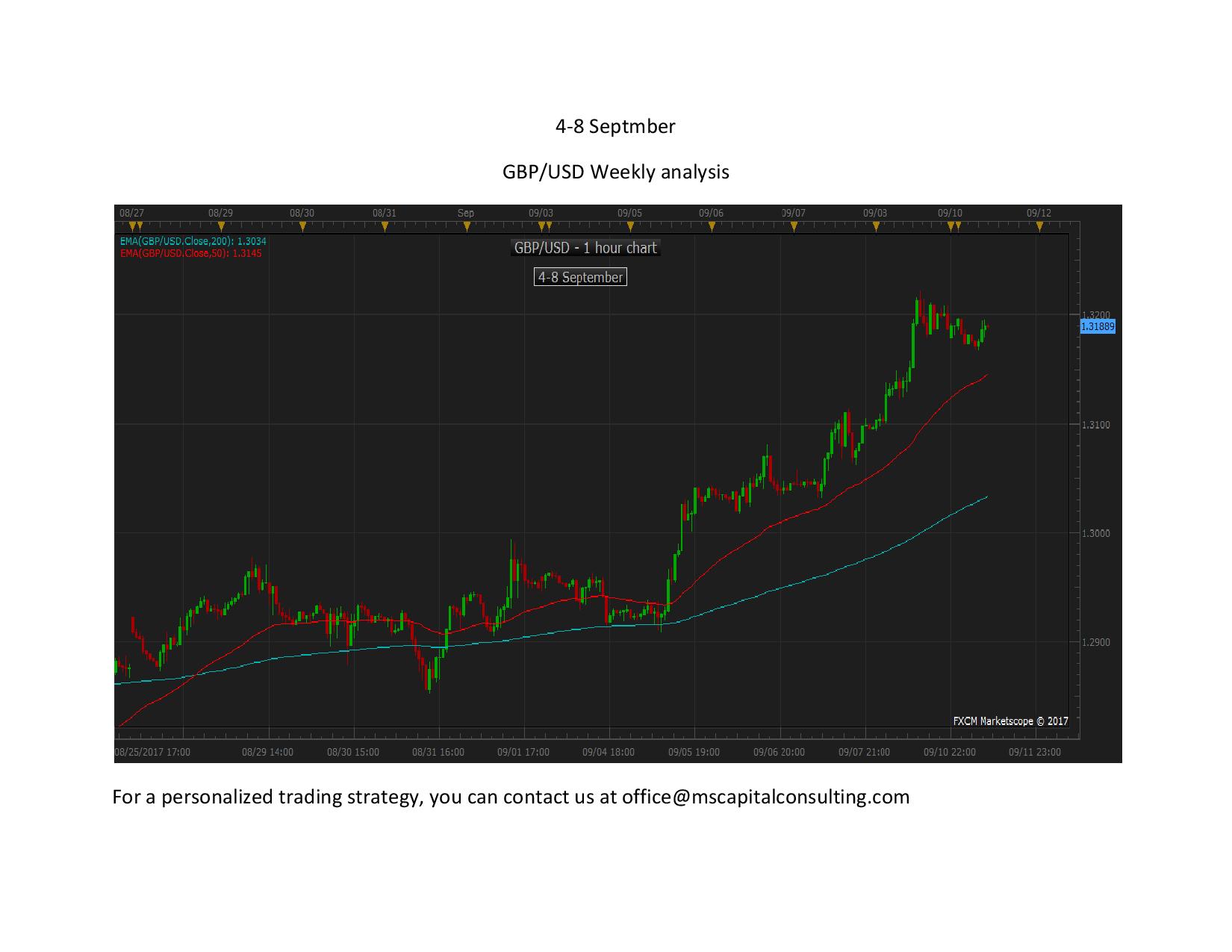 The USD/CAD pair fell around 200 pips at the end of last week due to the economic data from Canada and the US. Canada’s economy unexpectedly accelerated at a 4.5 percent pace in the second quarter. The expansion was the fastest in six years and surpassed the 3.7 percent first quarter growth rate, which was left unchanged by Statistics Canada. As a result of this growth, Bank of Canada will continue raising interest rates this year - possibly as soon as next week - as the nation’s economy nears full capacity in what is turning out to be the strongest growth spurt in more than a decade. According to Doug Porter, chief economist at Bank of Montreal, “the hits just keep coming for the Canadian economy”. “Even the naysayers will struggle mightily to find fault in this rock-solid report.”, added Porter.

U.S Consumer sentiment pulled back to a final August reading of 96.8 in August from a preliminary reading of 97.6, according to the University of Michigan gauge released Friday. The U.S. economy created 156,000 jobs in August while the unemployment rate edged higher to 4.4 percent, according to a closely watched government report Friday. Economists surveyed by Reuters had been expecting payrolls to grow by 180,000 in August and the unemployment rate to hold steady at 4.3 percent. In addition to missing estimates, previous months' job totals also were cut. June was revised down from 231,000 to 210,000 while July fell from the initially reported 209,000 to 189,000, the Bureau of Labor Statistics said. The average work week declined by 0.1 hour to 34.4 hours. 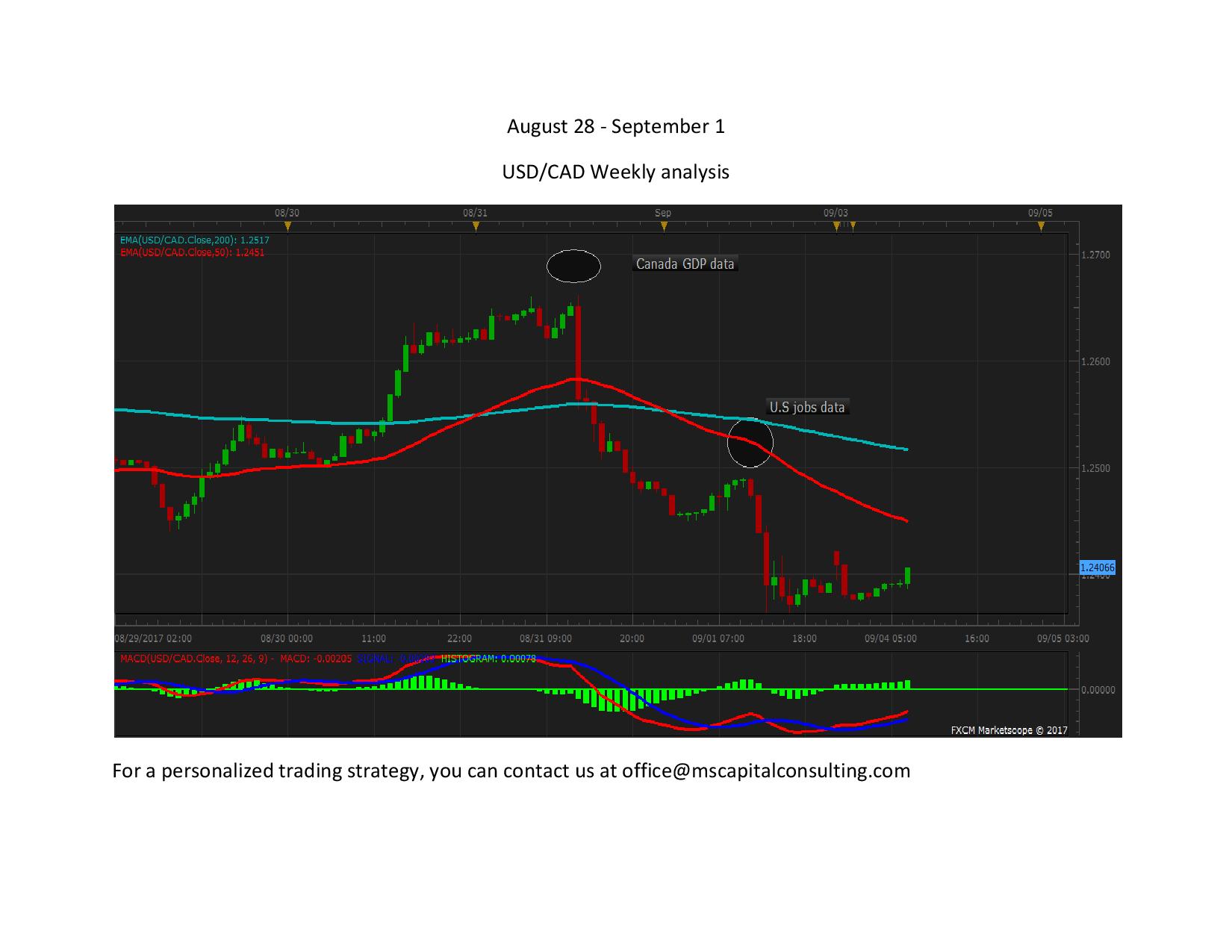