Global fintech funding rose to $111.8B in 2018, up 120 percent from $50.8B in 2017, fueled by mega M&A and buyout deals, according to the KPMG Pulse of Fintech report. The fintech market in most areas of the world remained relatively healthy and well-poised for growth, also in 2019.

Deals in the second half of 2018 were topped by Blackstone's $17B investment in Refinitiv, the $3.5B acquisition of Blackhawk Network by Silver Lake and P2 Capital Partners, the $3.4B buyout of VeriFone by Francisco Partners, and the $2.2B acquisition of iZettle by PayPal. These deals followed on the $12.86B acquisition of WorldPay by Vantiv in H1'18.

Fintech deal volume declined markedly in the second half of 2018, but still reached 2,196 deals for the year, up from 2,165 in 2017.  Increasing geographic diversity of fintech VC funding continues to help drive deal volume, even as larger fintech hubs see more concentrated investment in larger deals.

“The growing deal sizes, higher levels of M&A activity and the geographic spread of deals all highlight the increasing maturation of the fintech sector on a global scale,” said Ian Pollari, Global Co-Lead, KPMG Fintech. “Fintech start-ups in markets as diverse as Germany and Brazil are attracting larger and later stage rounds, while the more established fintech leaders in the US, UK and Asia are making their own investments and acquisitions in order to expand their product and geographic reach.”

2018, a year of multiple record highs across fintech investment

Latin America was a strong target for fintech investors in 2018, with Brazil achieving a record high of $556M across 28 deals. Canada saw a record 119 fintech deals in 2018 - bringing in $1.18B of investment.

China accounted for the lion's share of Asia fintech investment, with $18.2 billion in funding during 2018 across 83 deals, led by Ant Financial's $14B raise in Q2. India fintech funding declined year-over-year, although still reaching $1.7B across a record 115 deals, while investment and deal volume in Singapore grew for the fourth straight year, accounting for $347M across 61 deals. Australia saw $572M across 28 deals.

M&A( Mergers and acquisitions) activity in the Fintech sector experienced a cooldown in the second half of last year from its high of 189 transactions in 1H2018, and all-time high disclosed transaction value of almost $50 billion. Even though transaction volume in 2H2018 was 160, total disclosed transaction value was just shy of $13 billion largely because there were no box-office deals such as Blackrock’s $17 billion acquisition of Thomson Reuters in the first half of 2018. However, tax reform, a more relaxed US regulatory climate, and growing cash reserves fuel optimism among US dealmakers. While geo-political and economic issues appear to be affecting confidence, there is plenty of evidence that companies are prepared to take on big strategic deals when opportunities arise. Investor’s appetite for fintech firms remains undimmed with M&A hitting a record $112bn in the first three months of 2019, despite signs of a slowing global economy and the threat of a disorderly Brexit in the UK. Across the year the sector is forecast to hit record mergers and acquisitions volumes as well as the industry’s second-highest financing levels, despite the threat of a trade war between the US and China.

IT Spending, a new record

Worldwide IT spending is projected to total $3.79 trillion in 2019, an increase of 1.1 percent from 2018, according to the latest forecast by Gartner, Inc.

The shift of enterprise IT spending from traditional (noncloud) offerings to new, cloud-based alternatives is continuing to drive growth in the enterprise software market. In 2019, the market is forecast to reach $427 billion, up 7.1 percent from $399 billion in 2018.

The data center systems segment will experience the largest decline in 2019 with a decrease of 2.8 percent (see Table 1). This is mainly due to expected lower average selling prices (ASPs) in the server market driven by adjustments in the pattern of expected component costs.

The 10 most valuable fintech companies in the world are mostly between six and 10 years old, all with hundreds of millions raised (if not $1 billion-plus) and multibillion-dollar valuations. Yet, at the moment, not one of those unicorn seems articularly close to an offering 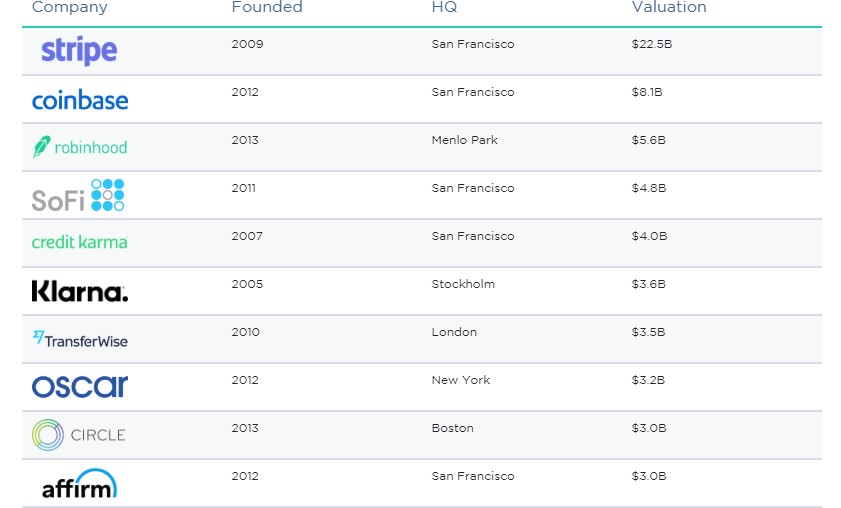