Companies in the S&P 500 repurchased $234.5 billion in shares during the third quarter, topping the previous record of $223 billion in the fourth quarter of 2018, according to preliminary data from S&P Dow Jones Indices. The wave of share repurchases has helped propel U.S. stock indexes to dozens of records in 2021.

S&P 500 component Microsoft Corp. said in September that its board had approved a plan to repurchase up to $60 billion of its stock. Car-rental company Hertz Global Holdings Inc. recently said it would buy back as much as $2 billion of its stock, while tech company Dell Technologies Inc. is planning a $5 billion share-repurchase program.

Buybacks are just one of the forces behind the stock market’s rally. Asset prices have continued to benefit from the monetary and fiscal support that policy makers put in place to help the economy get through the pandemic. And analysts have consistently underestimated corporate earnings, which are expected to grow 45% in 2021 for companies in the S&P 500. 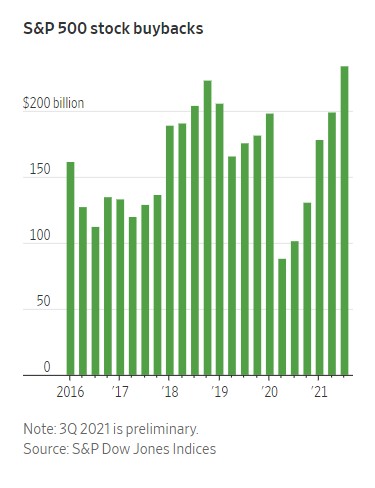 Investors this week will scrutinize signals out of the Federal Reserve’s two-day policy meeting, where officials may accelerate the process of winding down a bond-buying stimulus program. Central-bank officials could also shed more light on their expectations for interest-rate increases next year.
S&P 500 buybacks plunged from nearly $199 billion in the first quarter of 2020 to just under $89 billion in the second, as companies reeling from the onset of the pandemic moved to conserve cash. Share repurchases increased in each following quarter, approaching $199 billion again in the second quarter of 2021.
Repurchases can support stocks by reducing a company’s share count, boosting its per-share profits. And they can boost investor sentiment by suggesting executives are optimistic about their companies’ prospects and confident in their financial position.
Stock buybacks have come under fire from politicians who say companies should use cash to invest in their businesses instead of supporting their share prices. The version of the $2 trillion education, healthcare and climate spending package that passed the House in November would create a 1% tax on the net value of a company’s stock buybacks.