The $3 trillion market for low-rated companies’ debt is having its best year ever, powered by a rebounding economy and investors’ demand for any extra yield.

The record issuance marks a notable rebound from March 2020, when investors’ worries about widespread bankruptcies and defaults sent prices for low-rated debt slumping. Now, low interest rates and a stimulus-fueled economic rebound that has supported companies with weaker credit ratings have boosted the appeal of riskier debt.

Junk bonds and so-called leveraged loans are typically issued by companies with significant debt relative to their earnings, making them more sensitive to the economy’s trajectory. Economists surveyed by The Wall Street Journal expect the U.S. to grow around 6% this year and 3% in 2022. In the junk-bond market alone, U.S. companies have issued more than $361 billion of bonds with speculative-grade credit ratings through Sept. 14, according to S&P Global Market Intelligence’s LCD. That is the second-most junk bonds ever sold in a single year and on pace to surpass 2020’s $435 billion record, analysts say. 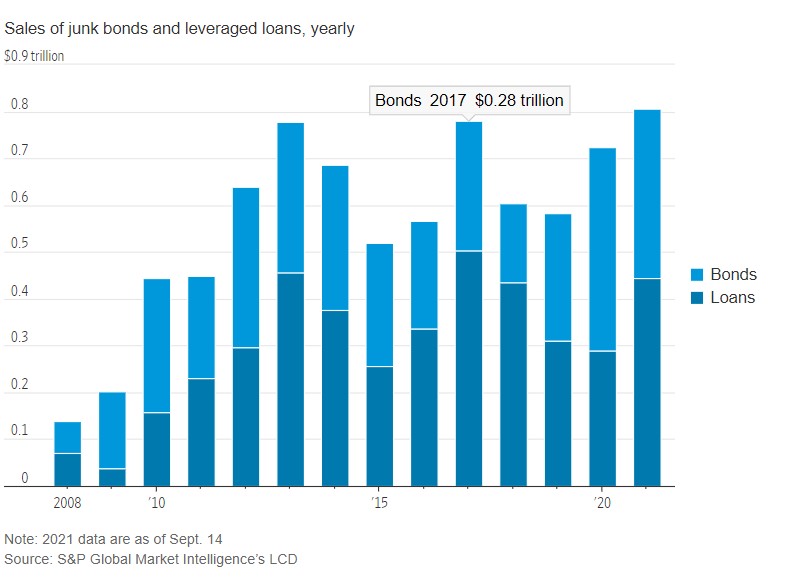 Even if U.S. growth has peaked, any expansion should still support junk bonds, said Mark Durbiano, senior portfolio manager and head of high yield at Federated Hermes, which manages more than $645 billion in assets. He is recommending that clients hold more junk bonds than benchmarks.

The rally in junk debt marks one sign of investors’ retreating worries about the recent jump in inflation, which erodes the purchasing power of bonds’ fixed payments and can drive the Federal Reserve to raise interest rates. The consumer-price index spiked above average yields on junk bonds earlier this year, upending the conventional logic of investing in bonds, which are typically prized for protecting investors’ money.

The extra yield, or spread, that investors demand to hold an ICE BofA index of junk bonds over Treasurys recently stood at 3.03 percentage points above Treasurys, when adjusted for options. That is just above this year’s low of 3.02 percentage points hit in early July—the lowest level since July 2007.

Many companies have been using recent sales to extend the maturity on their debt, which lowers the yearly interest burden. The number of leveraged loans coming due between 2021 and 2023 fell to $56 billion, according to LCD, out of around $1.3 trillion outstanding. More than $80 billion of loan sales this year have been tied to deals meant to amend credit documents and extend maturities—the second-highest yearly total in data going back to 2012. 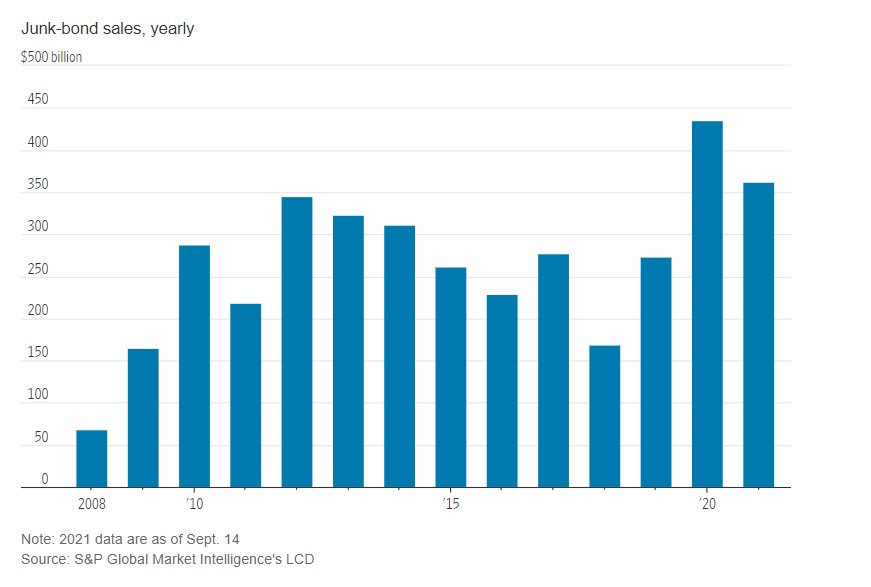