The recent drop in U.S. Treasury yields reveals some investors’ doubts about how strong the economy will be in the coming years, even as inflation pushes to its highest level in more than a decade. Yields, which fall when bond prices rise, have surprised many by sliding in the second quarter of the year. That marks a reversal from the sharp rise of the year’s first three months, when markets generally rode a wave of optimism that stimulus and reopenings would spur a roaring ’20s type of acceleration. Treasury yields play an important function in the economy, helping set borrowing costs on everything from mortgages to corporate bonds. They are also a closely watched economic barometer, with longer-term yields in particular tending to rise when the growth outlook improves and decline when it falters. 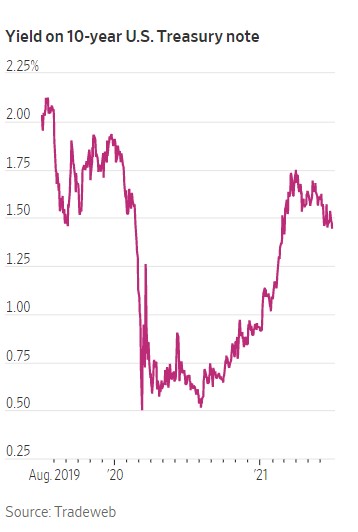 Yields on conventional and inflation-protected Treasurys still suggest the economy will grow at a healthy pace in the coming years. But expectations aren’t as buoyant as they were in March. Back then, yields reflected forecasts that the Federal Reserve’s benchmark federal-funds rate would remain near zero this year but start climbing by 2023 and steady at around 2.5% without causing the inflation rate to fall to below the central bank’s 2% target. investors still expect the Fed to raise rates at roughly the same time, if possibly a little sooner. But projections for rates over the longer term have subsided somewhat, as have inflation expectations—indicating a slightly weaker economy, less able to withstand interest-rate increases.