Investors should savor the dividends and buybacks coming from big U.S. banks right now. They might not get the same kind of boost next year. Banks still likely have more loan-loss reserve releases to come. That will certainly boost earnings, but it will have a somewhat more limited benefit on capital levels because banks were allowed by regulators to delay some of the negative effects of reserving on capital during the pandemic. Releases also mean that banks would have smaller loss cushions for next year’s stress tests. Presumably, though, if economic conditions continue to improve markedly, the test scenarios also will get a bit less dire. 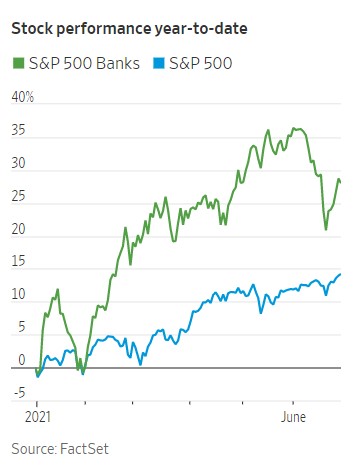 Meanwhile, capital requirements not related to stress tests also might start to squeeze more. The biggest banks’ required extra capital buffers due to their global systemic importance look to be on the rise. Meanwhile, huge deposit inflows have also pushed banks closer to their leverage-ratio limits. The Fed could recalibrate all these rules, but the likelihood or outcome of those tweaks is tough to forecast.

Investors might just need to start to change their frame of reference on capital—especially if they are inclined to believe that the economy is improving, which would lead to loan growth and higher rates. Bigger can often be better in banking. Banks that slim down too much to free up capital to return might start to sacrifice longer-term earnings power at just the wrong time. Ultimately it isn’t the capital that really matters to investors but the return on capital.