The only way to argue that stocks aren’t wildly expensive is to say that something fundamental has changed about the market environment.

Thanks to the Federal Reserve, such a change might actually have occurred but investors could pay a heavy price if they turn out to be wrong.

The S&P 500 trades at 22 times analysts’ expected earnings—its most expensive level since the dot-com bubble. It also trades at its richest multiple to its inflation-adjusted earnings over the past decade—the valuation method popularized by economist Robert Shiller —in nearly 20 years. The total value of U.S. stocks as a percentage of the U.S. economy, which Warren Buffett once called “the best single measure of where valuations stand at any given moment,” is now higher than at any point during the dot-com years. One argument for stocks may not be as expensive as they seem is that interest rates are extremely low. When the 10-year Treasury note yields just 0.95%, today’s P/E multiple looks less outlandish than it would at a 5% yield. 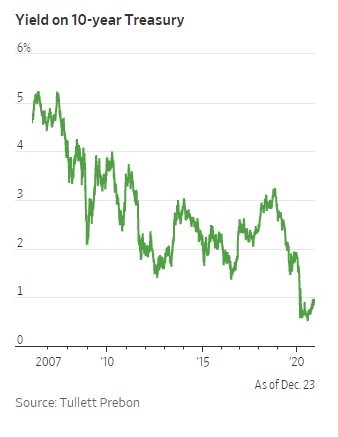 There is a problem with this sort of thinking, however. The 10-year Treasury largely reflects investor expectations of what the overnight rates set by the Fed will average over the next decade. The Fed responds to what is going on with the economy, setting rates higher when it is trying to cool things down, lower when it is trying to heat things up.

But the Fed this year revamped how it sets policy, abandoning its practice of pre-emptively raising rates to head off inflation. In its efforts to help the economy recover, it has committed to hold short-term rates near zero until inflation reaches 2% and “is on track to moderately exceed 2% for some time.” That means that rates over the next several years will be lower than they would have been under the Fed’s previous policy. Perhaps stocks can carry higher multiples and still be reasonably valued. The rules of investing have changed in the past, after all. Investor and financial historian Peter Bernstein noted how veteran Wall Streeters blanched when the dividend yield on stocks fell below the yield on the 10-year—a sure sell signal, they told him. What they missed was the phenomenon of companies reinvesting more of their earnings rather than paying them out. It would be a half-century before dividends surpassed Treasury yields again.