Beijing is dealing with a new flavor of China-skepticism in the wake of the pandemic and a more aggressive foreign policy. But certain things aren’t new: Foreigners are skeptical of Chinese economic data. The nation’s strong second-quarter growth, reported at 3.2%, has added further fuel to the debate.

Two other data points, in particular, have been raising eyebrows. China’s so-called fixed-asset investment, which includes investment in new capital goods and things such as land, fell 3.1% year over year in the first half of 2020, according to official figures, while the investment part of gross domestic product rose 1.5%. One factor behind the big discrepancy might be rapidly rising inventories, which aren’t included in the fixed-asset measure but do contribute to overall investment. 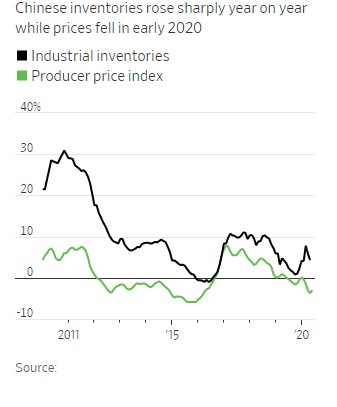 China’s inventories surged during the first half as production outpaced demand: industrial inventories were 4.3% higher in the first five months of 2020 than a year earlier. Moreover, the unusual combination of rapidly rising inventories and rapidly falling prices suggests that “real” growth in inventories was very high indeed.

That jump—companies were destocking in late 2019—might help explain why overall investment held up relatively well. It doesn’t augur well for the future, though, since prices are still falling and companies can’t build inventory forever. Unless Chinese consumers start spending again and businesses start investing in plant and equipment, rather than hoarding goods, 3.2% growth—or perhaps, somewhat less—might be hard to sustain.