Public pension funds set a 22-year performance record in the second quarter, recovering some but not all of their losses from the first quarter. Double-digit stock gains pushed pension returns to a median 11.1% for the second quarter, according to Wilshire Trust Universe Comparison Service.  Even with the rebound, median annual returns for the public pensions whose fiscal years ended June 30 were 3.2%, far short of the funds’ long-term investment-return target of around 7%.  Before the pandemic, public pensions were already trying to plug large funding holes by pursuing aggressive returns to make up for insufficient government funding in past years and decades. State and local pension funds in the U.S. held $4.05 trillion in aggregate as of March 31—$4.93 trillion less than the cost of promised future obligations, according to Federal Reserve data. 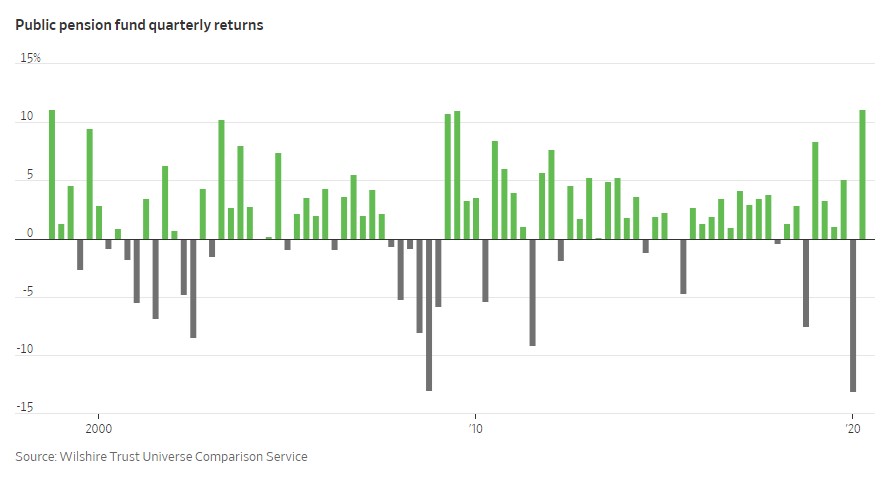 Investment shortfalls drive up the amount state and local governments have to pay in. Funds are also bracing for coronavirus-related government-revenue losses.

The $2.2 billion fund took the opportunity to add to holdings in technology stocks including Nvidia Corp., Adobe Inc. and Microsoft Corp., pharmaceutical stocks including Johnson & Johnson, Zoetis Inc. and Thermo Fisher Scientific Inc., and stocks that mix tech and finance such as PayPa Inc., Visa Inc. and S&P Global Inc.  The $194.3 billion New York State Common Retirement Fund, whose fiscal year ended on March 31 in the middle of market volatility, suffered an annual loss of 2.7%.  The roughly $17 billion fund has more than 70% of what it needs to cover future pension promises to K-12 and college teachers, its highest funding level ever, Mr. Spencer said. Though the state expects to pay extra over the following five years, he estimates the fund will lose the opportunity to earn about $40 million in investment returns.