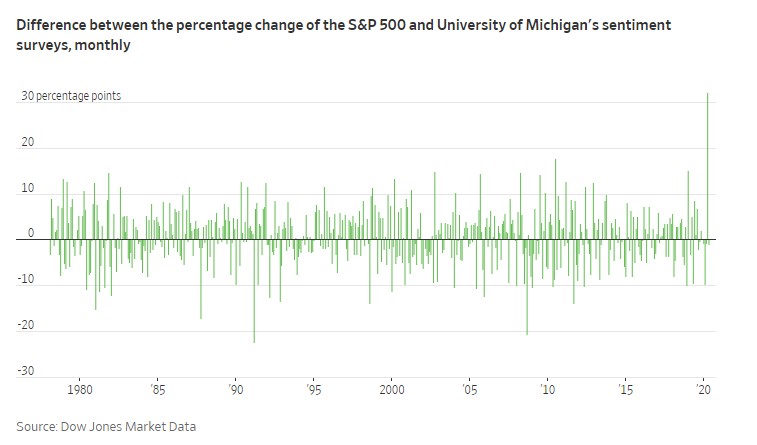 Stocks have rebounded dramatically off their March lows, while consumer sentiment is hovering near the lowest level in nearly a decade. The divergence is one of many realities investors are struggling to reconcile.
The spread between the monthly percentage change of the S&P 500 and the University of Michigan’s consumer sentiment survey climbed to 32 percentage points last month, the widest-ever gulf in data going back to 1978, according to Dow Jones Market Data.
The drop in sentiment reflects the wave of challenges unleashed by the coronavirus pandemic. Almost overnight, the economy swung from an expansion into a deep contraction. Unemployment rose to record highs from record lows. Personal incomes in March suffered the steepest drop since 2013, and consumer spending fell at the fastest rate since 1959. The numbers for April, due Friday, are expected to be worse.
Yet stocks have continued to rise. The S&P 500 has surged 34% since bottoming March 23, cutting its losses for the year to 7.4%.
The stock market and sentiment both ultimately reflect conditions in the economy, he said. But sentiment surveys tend to closely track economic trends, while stocks can also be influenced by other factors, including Federal Reserve policy.
The S&P 500’s 13% rally in April marked its best month since January 1987, a rise most market observers attribute to the unprecedented level of stimulus provided by the Fed. The pace of the rebound suggests many investors are betting on a V-shaped recovery—a sharp drop in economic activity, followed by an equally rapid rebound.