Investment in the U.S. shale sector will drop by half this year, the International Energy Agency said Wednesday, predicting a period of pain for producers, even as oil prices rally.
The forecast body-blow to the availability of capital for U.S. producers comes as part of an expected world-wide decline in broader energy investment during 2020. The Paris-based organization expects global investment in oil and gas to decrease by a third and the financing of all energy projects to decline by 20%. 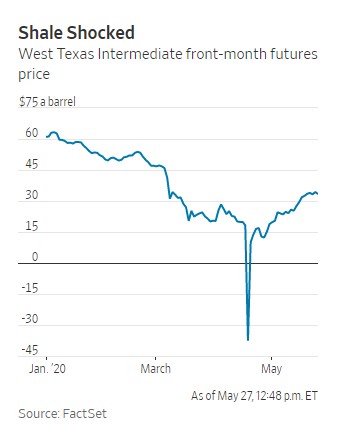 Production cuts from oil-producing nations have in recent weeks combined with a bounce in demand after the lifting of lockdowns to help oil prices begin their recovery from their April collapse. U.S. companies spent on average $35.90 to produce a barrel of oil in 2019.. U.S. oil prices haven’t traded that high since early March.
With oil prices long-trading below the cost of production for shale producers, several companies have been forced to file for bankruptcy in recent months, while U.S. major oil companies have slashed capital spending. Exxon Mobil, for example, said in April it would cut its 2020 capital spending by 30% this year in response to the coronavirus.
The drop in spending has already reduced U.S. output as shale companies drill less and shut in existing wells. The EIA said Wednesday that average daily crude production during the week ended May 15 was 11.5 million barrels. That’s down 12% from a record 13.1 million in March.