Netflix Inc shares fell 5% on Friday after Goldman Sachs downgraded the streaming giant, which is facing a slowdown in consumer spending and tough competition from Amazon.com and Walt Disney Co.

The streaming pioneer in April lost subscribers for the first time in more than a decade in a sign of troubled times ahead for the industry as rising prices of food and gas left people with little to spend on entertainment. Suspending its services in Russia after the Ukraine invasion also took a toll on Netflix.

Goldman downgraded the stock to "sell" from "neutral" and slashed its price target to $186 from $265, the lowest PT among analysts covering the stock, according to data from Refinitiv.

Netflix is already considering a cheaper subscription that includes advertising, following the success of similar offerings from rivals HBO Max and Disney+.

For a third straight year, stock-fund investors pocketed big gains. The average diversified U.S.-stock fund rose 22.5% for the year, according to Refinitiv Lipper data—following gains of 19.1% in 2020 and 28.3% in the pre-pandemic year before that. The stock-fund average gain included a 6.7% advance for the fourth quarter, as many investors remained convinced that Covid infections won’t lead to the same level of economic disruption as happened at the start of the pandemic and lockdowns in 2020. International-stock funds were up 9.6% for 2021, including a 2.3% gain in the fourth quarter. Underpinning the rally was an economic rebound that was stronger than many analysts had expected; companies posted some of their best-ever results. 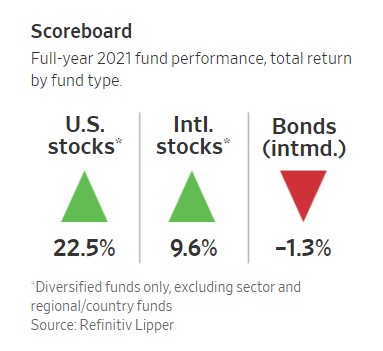 Many investors nevertheless continued to hedge their bets. As they did in 2020, investors put more money into the relative safety of bond funds than they did into stock funds, foreign or domestic. They sent a net $587.10 billion into bond-focused mutual funds and exchange-traded funds in 2021, according to Investment Company Institute estimates.

Bond funds declined in 2021. Funds tied to intermediate-maturity, investment-grade debt (the most common type of fixed-income fund) were off 1.3% for the year, including a 0.2% average decline in the fourth quarter.

The ride might be more rocky in 2022 at least according to some of the same analysts who underestimated 2021 with the Federal Reserve expected to raise interest rates, and the uncertainties of the virus and supply-chain problems.

Investors can expect 2022 to be a year of transition, says Lauren Goodwin, economist and portfolio strategist at New York Life Investments. Although the world is going from “peak pandemic to managing Covid-19 and more-regular life,” she says, investment managers can expect greater volatility in markets, and lower returns than in past two years, as governments’ economic supports are reduced. 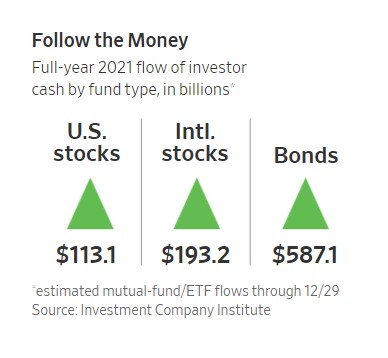 Value investing—buying stocks that are cheap on measures such as earnings or book value—is having a renaissance. Up to last Thursday, large value stocks beat more expensive “growth” stocks by the most of any 50-day period since the technology bubble burst in 2000-01, with the exception of the post-vaccine rebound early last year.

The big question for investors: Does this mark the rebirth of what was a dying strategy? Or was this just another spasm, already fading as technology stocks rebound?
One interpretation is that the leap in yields was the pin that pricked the bubble in growth stocks, shocking investors out of their lazy assumption that Big Tech just always went up. For hard-core value investors (and after years of underperformance, they have to be hard-core), this marks the moment when the purchase of cheap stocks can return to its rightful place as a leading strategy.
Larger stocks can, of course, be dominated by sentiment too, as shown by the involvement of huge telecom, media and technology stocks in the dot-com bubble of 2000. But most of the time there is a tighter focus on the outlook for earnings and the discount rate.

It is that discount rate that provides the alternative interpretation for why growth stocks sold off as bond yields rose: mathematics. The valuation even of highly profitable companies such as Microsoft is high because they are expected to keep growing earnings at a high rate for a long time, and those far-in-the-future earnings are worth more today when the discount rate, based on bond yields, is lower. As that discount rate rises, those future earnings should be worth less to an investor.
Because growth stocks have the highest duration (the lowest dividends), and value stocks the lowest (the highest dividends), value had a wonderful time. As bond yields have pulled back a bit, or at least their upward climb has been interrupted, growth stocks rebounded.

The trouble with this explanation is that the link between bond yields and bigger gains for value stocks isn’t super strong, and changes over time. Even in the past year, long-dated bond yields and a pure measure of value stocks only moved together about 30% of the time, and that relationship has been weaker recently.

Partly that is because other things matter too; most important, the market’s assessment of the economy’s strength has a big effect on value stocks. 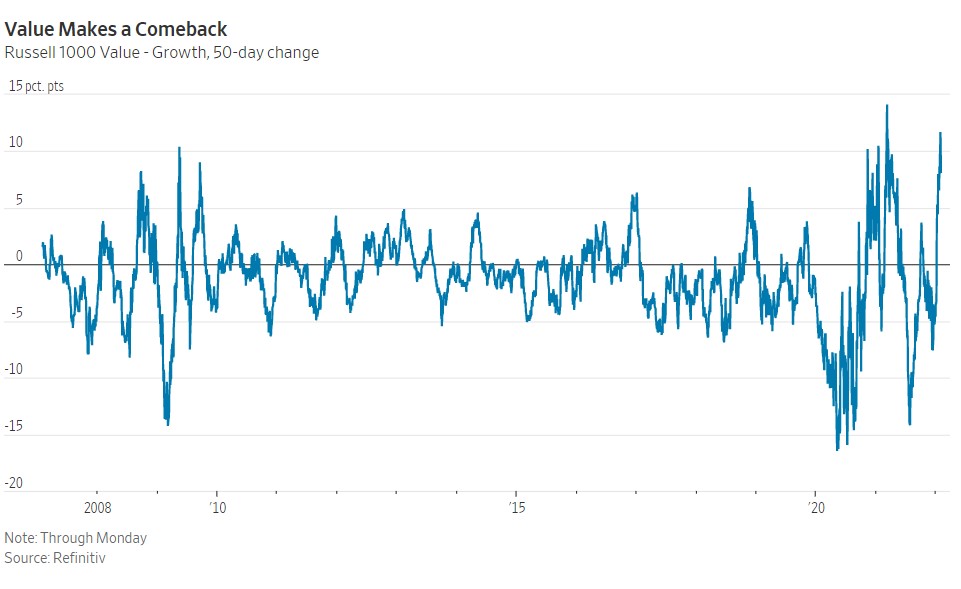 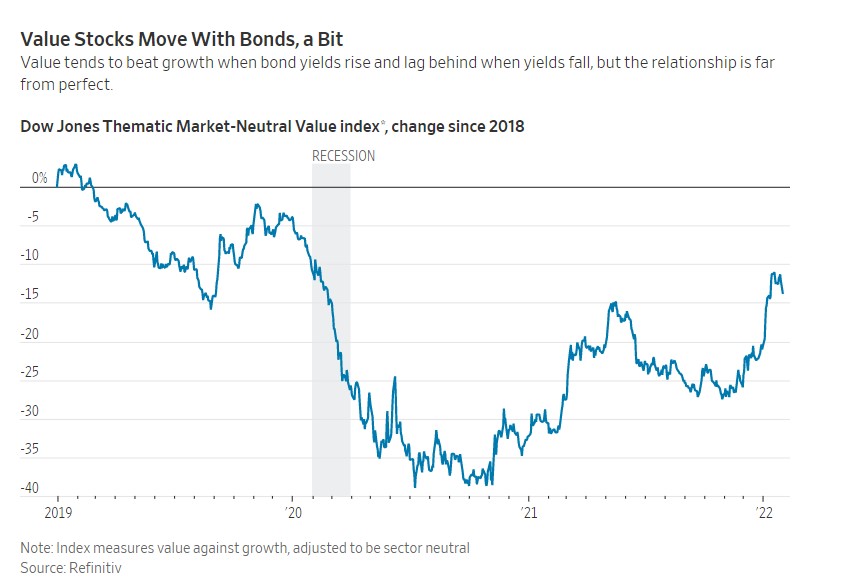 Goldman Sachs  slashed price targets on Tesla (NASDAQ:TSLA) to $1,000.00 per share (from $1,200.00). New price targets reflect “broadly” lowered estimates that mirror “additional supply chain constraints in the near-term, and weaker demand in the intermediate term.” A more cautious stance on estimates comes along with a more conservative GDP forecast from GS’ economics team. GS also slashed the US SAAR forecast for 2022/2023 to 14.5 million from 15.75 million.

“The COVID-related restrictions in Shanghai have lasted longer than we had initially expected, and even with Shanghai moving to reopen, we believe that parts/components supply remains a risk in the near to intermediate term. In terms of demand, key metrics we monitor that correlate with auto demand, such as housing data and consumer sentiment, have slowed, and we're reducing our global auto forecast in conjunction with our colleagues. Moreover, PMI metrics like the ISM index, and consumer demand datapoints, have also weakened,” GS told clients in a note. “The rising interest rate environment will likely make it more difficult for early stage companies with negative FCF to raise capital,” GS analysts concluded.

Dan Levy of Credit Suisse cuts his price target on Tesla (NASDAQ:TSLA) to $1,000 from $1,150 Friday adjusting for “lower deliveries outlook, the associated margin impact, and an expected Bitcoin impairment" in Q2, but maintains an "Outperform" rating noting "long-term fundamentals are intact." The analyst affirms that supply chain issues and COVID lockdowns in China present significant short-term hurdles and sees a big drag on Q2 deliveries: "Our estimate is below consensus ~280k and is solidly below 1Q’22 deliveries of 320k; it also reflects a decline vs. our prior modeled estimate of 295k." He thus reduces "2Q EPS estimate to $1.10 from $2.06, and below consensus $2.08" – one of the key reasons behind the price target cut.

Nonetheless, Credit Suisse maintains the "thesis that robust fundamentals ahead should outweigh the near-term challenges for Tesla such as the recent growth sell-off, production disruptions in China, lingering semiconductor shortage, and magnified inflationary pressures."

The analyst further notes that supply chain issues, currently the industry’s most significant headwind, may end up being Tesla’s tailwind, extending the company’s "lead over other OEMs in the race to EV… given its lead in vertical integration and its prior EV experience."

The analyst thus reiterates an “Outperform” rating on the stock, noting “we believe the long-term case for Tesla is clear.”

The announcement Tuesday comes a decade after Kellogg’s $2.7 billion purchase of Pringles, which signaled the company’s shift to focusing on the global snacks business with people increasingly eating more often between meals. Kellogg, along with rivals like Frito-Lay-owner PepsiCo and Oreo-cookie owner Mondelez, have leaned into the trend by introducing more snacks and snapping up smaller brands. On Monday, Mondelez said it is acquiring Clif Bar for $2.9 billion.

Cereal sales, by contrast, have stagnated in the U.S. as people eat on the go and reach for a greater variety of options in the morning. Brands including Special K, Froot Loops and Rice Krispies had for decades been a foundation of Kellogg, but are no longer seen as key growth drivers for the company. The pandemic briefly revived the cereal category as more consumers ate breakfast at home, but Kellogg expects flat revenue growth for its North American cereal business in the future.

“Those who scratched their head in 2012 about the zero-overlap Pringles deal should scratch no longer. It’s the legacy North American business that didn’t fit management’s plans, and today’s announcement makes that final,” Consumer Edge analyst Jonathan Feeney wrote in a note to clients.

Kellogg has been weighing spinoffs as a potential strategy since 2018, executives told investors on a conference call discussing the announcement on Tuesday. CEO Steve Cahillane said all three businesses have “significant” standalone potential, although the company is exploring alternatives including a potential sale for its plant-based business.

Combined, Kellogg’s plant-based division and North American cereal business accounted for about 20% of the company’s revenue last year. The remaining business includes its snacks, noodles, international cereal and North American frozen breakfast brands. The tax-free spinoffs are expected to be completed by the end of 2023.

Names for the new companies haven’t yet been decided, and proposed management teams for the two spinoffs will be announced by the first quarter of next year. Cahillane will stay on as chief executive of the global snacking company.

The snack-focused company will also be looking to add to its portfolio through acquisitions, according to Cahillane.